History Depicted On The Mural

What the mural depicts of the history of Pt Vincent

While there are many things which attract people to Port Vincent, it would be fair to say that the water, and activities pertaining to the water, hold primary interest.  Port Vincent is a very safe harbour, protected by the spit one end, and the cliffs the other.  Towns spring up around the needs of the community they service, and Port Vincent’s beginnings were agricultural, but the lack of a serviceable road to transport the grain to market brought with it challenges.  The beginning of what we see today, was the erection of the jetty in the late 1870’s (1877) - a private enterprise to simplify the loading of grain.  With the establishment of a railway track onto the jetty, loading of grain became much more streamlined.   The jetty enabled steamers and ketches to come alongside in the appropriate tide, load and leave again.  The remains of that jetty can still be seen at low tide directly off Main Street.  However, while the jetty changed hands, it was still privately owned, unlike the government owned Pt Julia and Stansbury jetties, and with other conflicting business involvement, meant costs became prohibitive.  There was quite a tussle between private enterprise and council as the future of both purchase and transportation of grain was decided.  Until in 1902 the construction of the wharf as it is now, began with Council control, in three stages, being completed in1909 with the dredging of the channel.  The chapter From Jetty to Wharf in the book Port Vincent Shipping Port to Pleasure Resort details about both ownership and responsibility of costs regarding this issue. 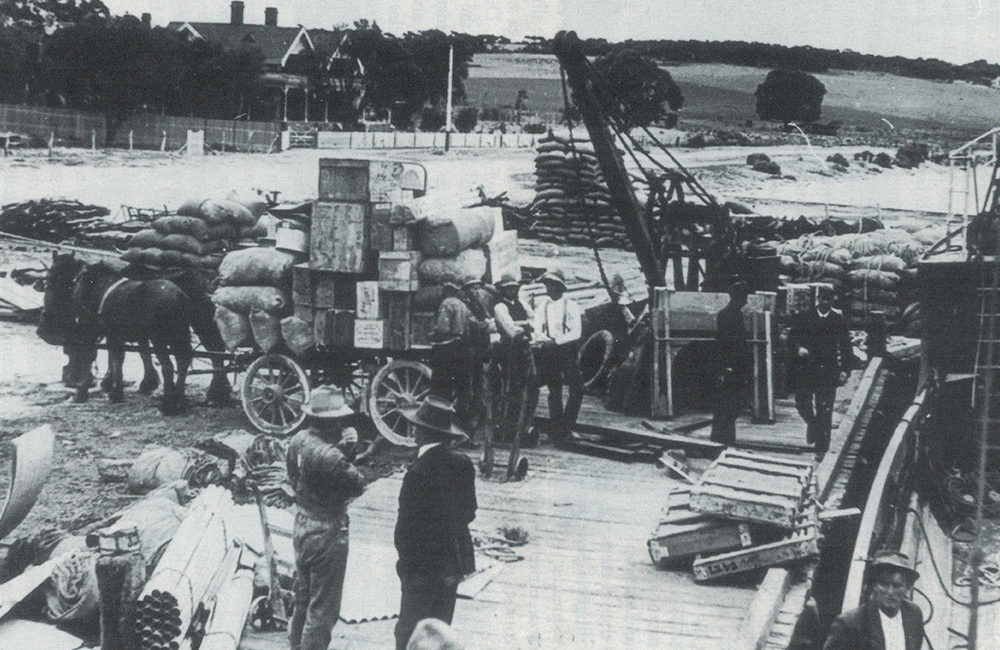 The wharf became a hive of activity during the grain season and the infrastructure built to accommodate the bagged grain and its transportation was impressive, with large sheds and covered storage areas which extended far beyond the wharf.

The fisherman’s jetty was added in 1937, and while the transition from bagged to bulk grain handling began, Port Vincent was still a viable port with a deep wharf for the bagged grain, but times move on, and by 1970 Port Vincent was no longer a port and the wharf is now a recreational attraction, having reduced from 450 feet in its hey day to 120 feet today. 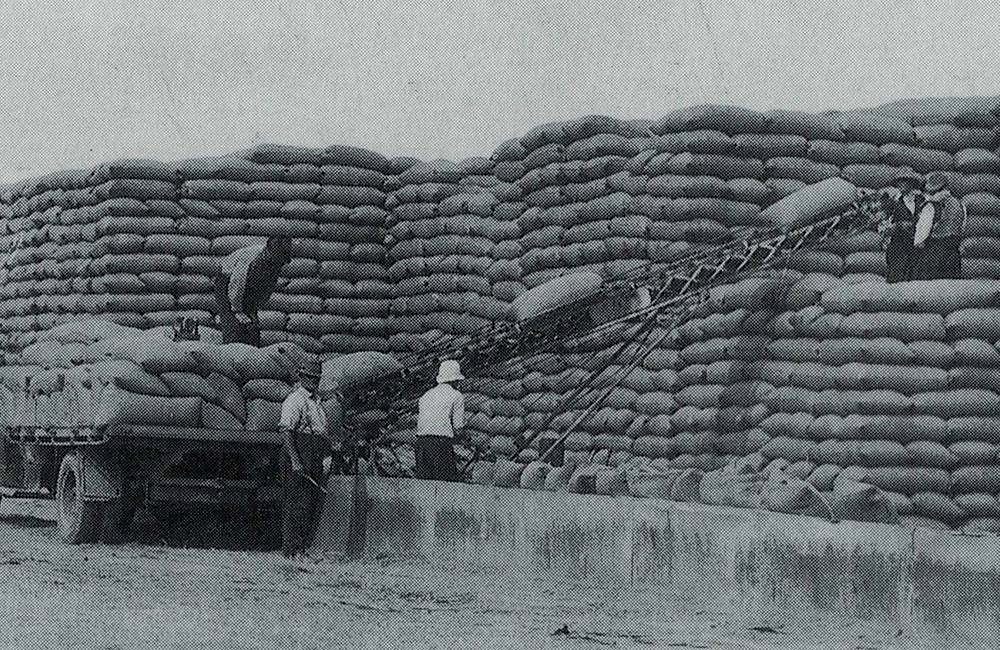 Most of the year round fisherpeople can be found on the wharf, dropping a line in, or a crab net, with a high level of success. The wharf continues to be the focal point of activities, such as Gala Day and the Saltwater Classic. In fact, any gathering of people usually revolves around the wharf.  It’s a perfect vantage point to watch the sailing, and to watch the kids enjoying the time honored activity of jetty jumping.  Now the sea is dotted with kayaks, paddle boards, jet ski’s, sail boats big and small, and fishing boats of all shapes and sizes.

In the late 1870’s steamers were a common sight, carrying passengers and cargo between Port Adelaide and the coastal towns of Yorke Peninsula, including Port Vincent.  The Ceres and the Wakefield were the main steamers servicing Port Vincent about twice a week on average until the early 1900’s.  The Juno joined the service in 1904 and could cross the gulf in 3 hours and 50 minutes, under normal sea conditions, with the Karatta also offering a service during this period.  Essentially these vessels transported cargo and passengers, rather than grain. 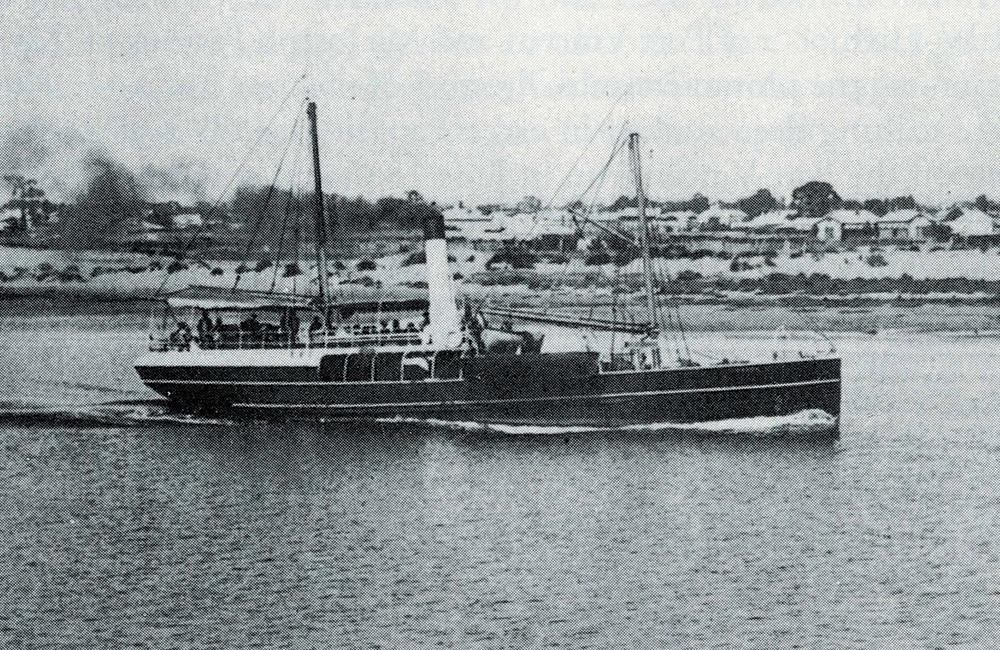 While the steamers were reliable, relatively fast, and could hold a large amount of cargo, it was the ketches which captured the imagination of the people. 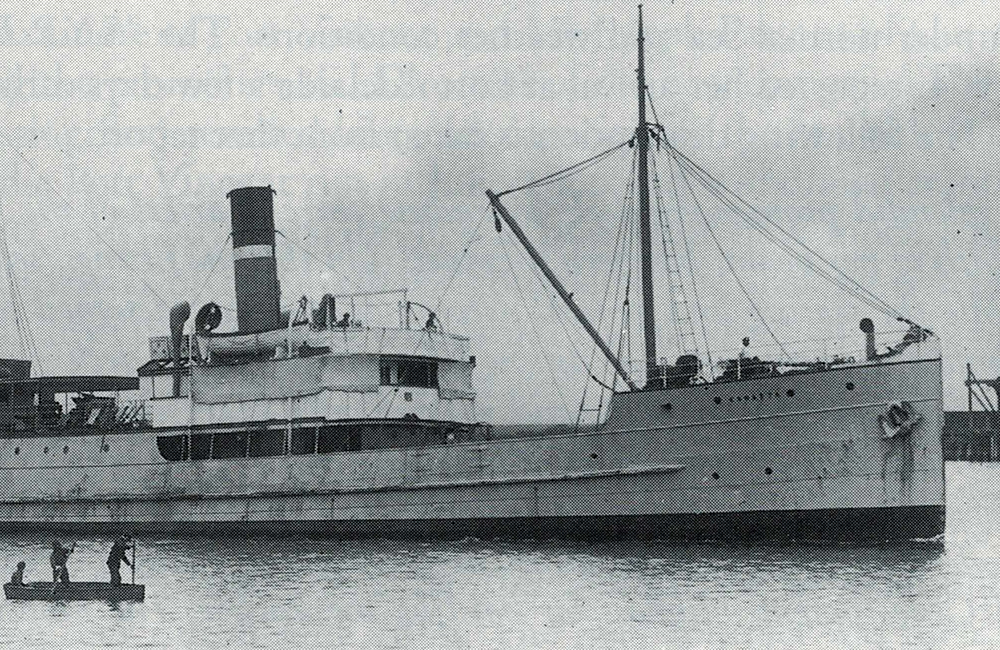 Ketches could be loaded fairly quickly in the early days. The Ruby, in 1883, was able to be loaded with 300 bags of grain in 3 hours!

Bag lumping, as it was known, provided employment, as did carting the grain from farm to seaside by horse and cart.

Left:  Typical drays, which regularly hauled 8 tons of grain.  Prior to a weighbridge being installed each bag was weighed individually.  All the bags were moved by hand, onto grain elevators.  Men picked up the bag of grain, dumped it on the elevator which took the bag to the top of the stack for another person to stack it.  This enabled them to have higher stacks of grain.  By the 1930’s grain was transported by a small truck, as well as the horse drawn vehicles.
Right – steamers at the wharf L to R Jessie Darling, Juno and Kopoola 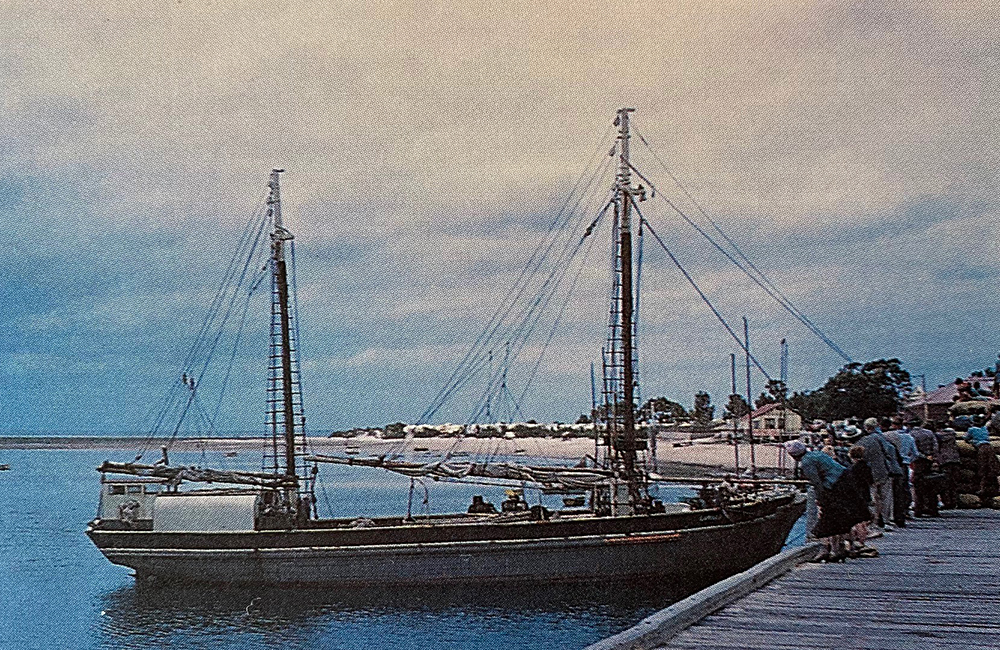 Settlers were drawn to the Port Vincent area during time of settlement due to the good cropping land available in the area.  Most derived their income, or were dependent on farming, and the linked industries  of grain handling.

Wheat and barley were the primary crops, with varieties of canola, peas etc,  expanding the crop varieties as time went by.

Originally the roads were such that grain could not be transported by road, so the necessity of a good reliable shipping port was essential.
With the development of Port Giles and Ardrossan Grain terminals, shipping was, and is still, the main means of transporting grain. But, the horse and buggy were replaced by the small farm trucks, and now the big B doubles ply the roads between farm gate and the terminal.

Agriculture remains the main industry in this area, but the methods used to both sow, reap, and transport the grain have changed incredibly. While crops were mainly wheat and barley, even the strains of these grains have been modified and improved immensely.  Once the dreaded north wind during November saw many farmers lose much of their crop, and the grain fell to the ground in the wind.  Now strains have been modified to overcome such problems, and strains are now more insect and pest resistant.

Farming back in the early 1900’s required farm hands to assist with horses and bagging of grain. The harvest was a long drawn out process, with small machinery, manual work, and battling of the elements.  Today the machinery is much larger, as are the farms, with most farms coming on the market being gobbled up by bigger conglomerates. In the early 1900’s until the 1960’s most farms were mixed, with a few sheep, cows which were milked daily, pigs, chickens, with eggs sold as well as grain crops.  But, as time progressed the small mixed farms on small acreage were not viable, particularly when trying to support more than one generation of families. So, farms became more streamlined in their production, and bigger, to accommodate the larger machinery. Larger and more mechanised farms has unfortunately meant less jobs, and subsequently less people – this is the price  of progress.

Regardless of how farming has changed, the gorgeous views of the ripening grain, and other crops still captures the imagination. 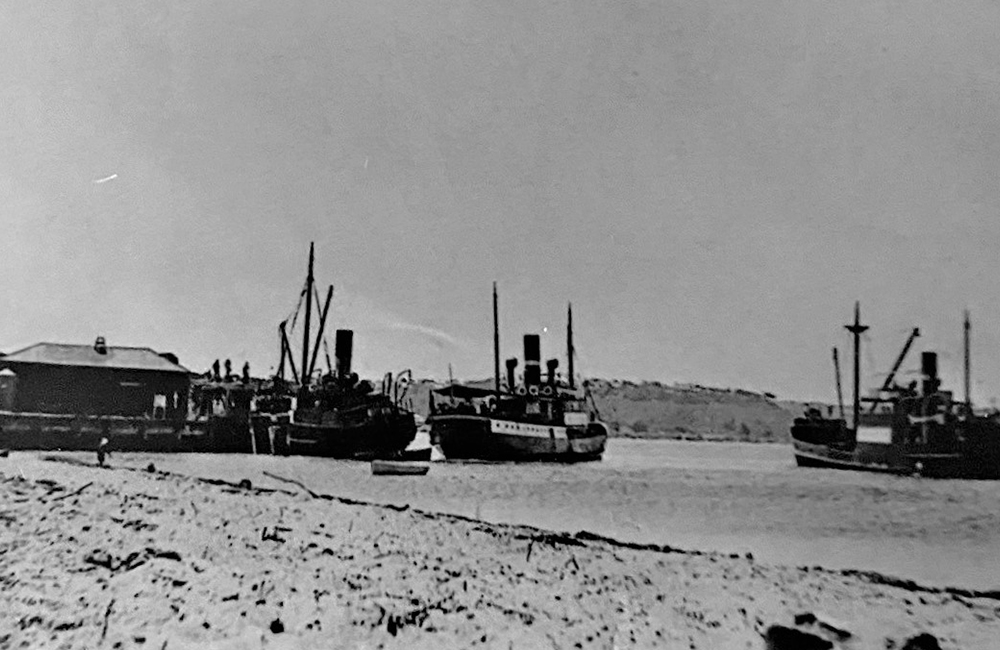 Where there is water there will always be sailing. When some affordable 14 foot sailing boats came on the market back in the early 1930’s, the concept of the Port Vincent Sailing Club was mooted.  The bay is perfect for sailing, being somewhat protected, with the opportunity for some more serious wind further offshore.  Sailing across the gulf was very achievable, so clubs from the Adelaide coast and the SA Yacht Squadron became familiar sights.   Sunday afternoon became the designated time to see the colour on the water, and the various shapes and sizes of yachts vied for position in a ‘friendly’ race.  In 1959 the clubhouse was built with three extensions over the years.  Resulting in the very comfortable facility we have today. Several members have gone on to compete nationally and even internationally, and the success they have experienced has brought renewed interest to the club.

Sailing competitions have developed with the Vincent Classic, and the King of the Gulf attracting a lot of interest over the years.  Easter was also a time when the Royal SA Yacht Squadron raced across the gulf in some fierce competition. Some of these events still run today, including several classes of competition run on Sunday afternoons through the summer months. 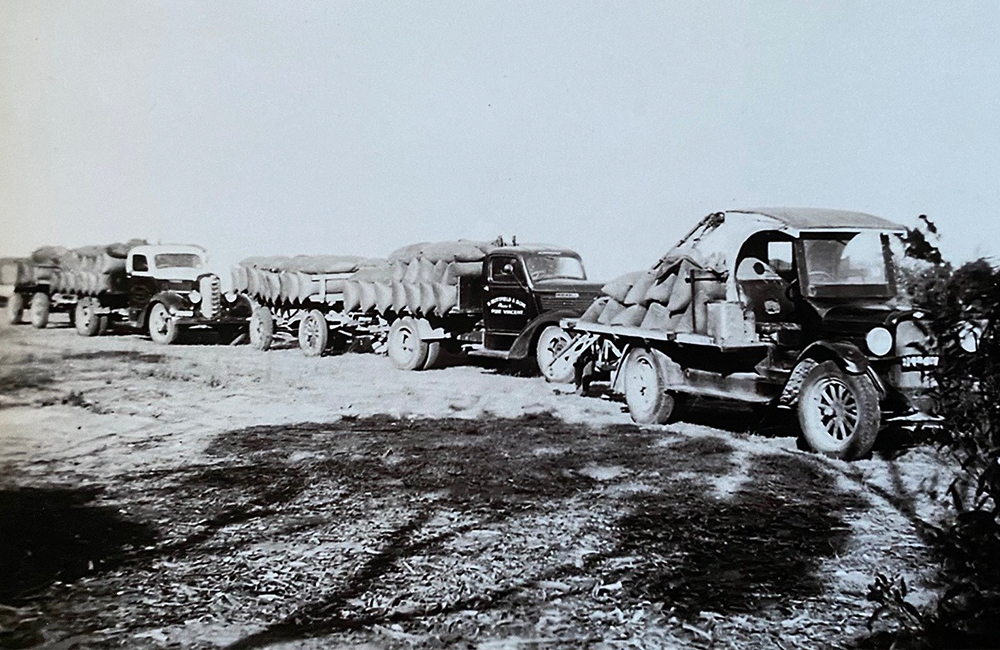 After a small group of local fishermen formed a marine rescue team in 1998 Coast Guard was given a charter Flotilla 10 in Port Vincent.  The Sea Rescue craft are now out on the water every Sunday, to ensure the safety of the sailors.  SAF10 Coastguard now has a well-equipped base at Bennett Park in Port Vincent, with a crew on standby to assist any sailor in trouble, any day of the week.  SAF10 became operational in 2000 at Bennett Park, and in 2020 upgraded their rescue craft, towing vehicle, and modified their shed in Bennett Park to accommodate Vincent Star.

Like many other seaside towns, Port Vincent began to host the Learn to Swim Campaign as it was known, teaching children to be safe in and around the water. In 1977 this progressed to what is now a very active and successful aquatics program, which is run throughout the school year (weather permitting), with children from all over the state attending. Students learn such activities as sailing, wake boarding, paddle and wake boarding and kayaking.  Coupled with the Girl Guide Hostel (Tuckerway), and more recently the Port Vincent Caravan Park and Seaside Cabins providing dormitory style accommodation. Port Vincent provides a great venue for safely learning water activities. 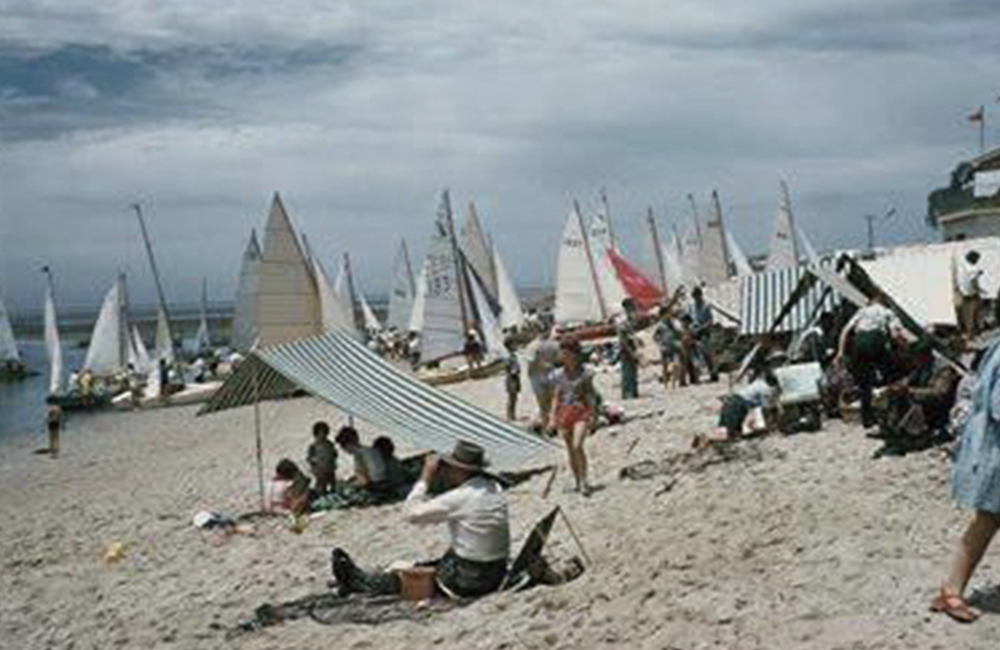