WATER TOWER TO WORK OF ART

Prior to white settlement, the indigenous inhabitants typically moved to where water was located.  These fresh water rock holes were covered with slabs of stone or brushwood to keep the water clean, and to prevent animals from drinking from them.  In the case of Port Vincent, the well on the foreshore (on the left hand side as you enter the Marina) provided for them.

An early record of European contact with Nharangga people in the area is provided by James H Hughes, a surveyor, who recorded the following in a letter to the Adelaide Chronicle in 1840: “having been alone in the huts there (Port Vincent) all night I went to the springs for water about 9 o’clock in the morning.  I had no idea there were natives in the neighbourhood.  I immediately commenced a search, and having gone 100 yards along the beach I saw about 10 natives fishing very deliberately middle deep in water.”

White settlement changed the focus to the storage of water, rather than the source.

During early white settlement in this area this was a typical scene.  The photo shows the farmhouse with the very precious windmill close by. Windmills were used to get the water from underground sources. When the wind blew and turned the fan, the centre shaft on the windmill drew water up from the underground water supply to fill the tank, which could then fill the trough for the animals to drink from.

Every house collected rainwater from the roof. This was stored in either a stone underground tank, such as is pictured, or in later times, a concrete or galvanized iron tank.  Often water was either pumped by hand or by windmill, to fill the overhead tank which provided water to the house by gravity feed.  Pumping water to the overhead tank was generally one of the chores undertaken by the children of the household on a daily basis.  When you had to pump water by hand, children were much more respectful of water usage!  The other thing which impacted water use, was that when the tank ran dry, it was not an easy task to get more water.  Toilets were generally a drop toilet in the backyard with no running water.

With smaller house blocks and changing attitudes toward rain water, for many years new housing did not utilize the rain catchment of the roof, and many houses did not have rain water tanks. But, water went directly to storm water which is often is released out to sea.  Today it is mandatory to have a rain water tank when building a new home in South Australia, so efforts are being made to utilise all the water we can capture. 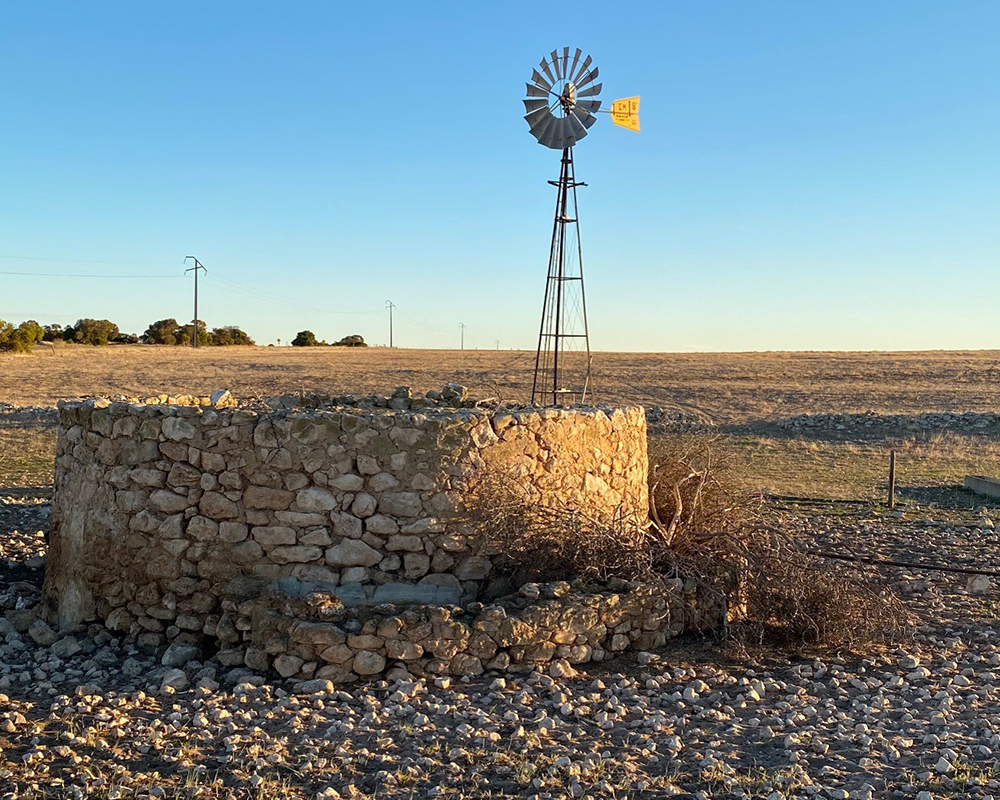 On farmland today these very vital parts of our history are rarely in use.  But, you will see many examples of tanks, troughs and windmills in the paddocks as you drive around the peninsula.  In this example, the shrubbery growing at the side of the stone tank, was once the trough where thirsty stock quenched their thirst after a heavy day of clearing the land, and pulling the machinery to put in and later take off the crops which grow so well around here.

As things progressed, and the need for reliable water increased, the need for the pipeline and subsequently the water tower, became evident.

The importance of tanks is again evident, as Yorke Peninsula terrain is not generally suited to dams and has no rivers to provide a water source (? Put in a link to the Maitland dam project?).  As you will see when you analyse our story boards, the water coming out of the tap at Port Vincent, is stored first in a reservoir, then on to the Paskeville tanks, then down the peninsula into holding tanks all along the way. Our water comes from the holding tank at Minlaton, across to a smaller tank –– on the Stansbury Minlaton road, then to a tank on top of our lovely water tower. Where would we be without the humble tank? 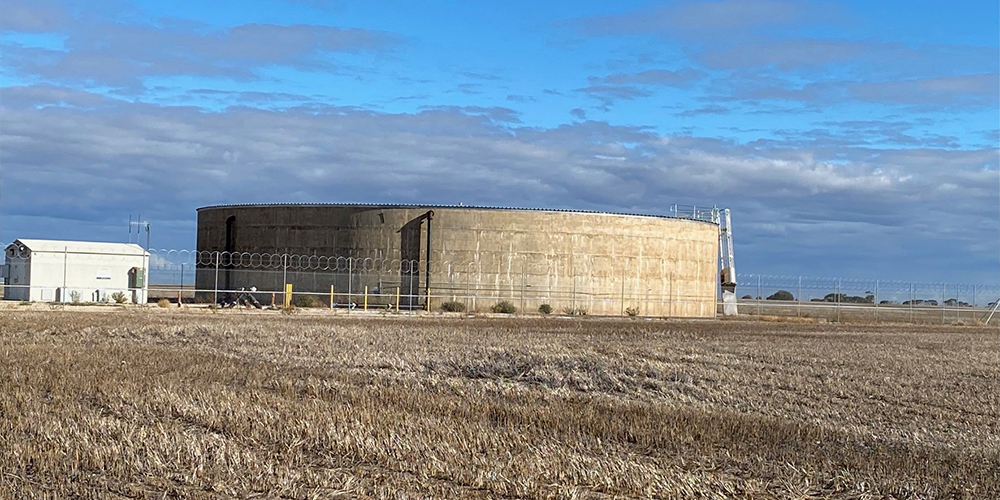 The water tower is vital to the life of Port Vincent , and deserves to be more than a grey, blank canvas  - and so began the journey not just to beautify the tower, but to acknowledge the tower’s importance and significance to our generation, and into the future.

And so to the process of transforming a blank canvas to a work of art:- 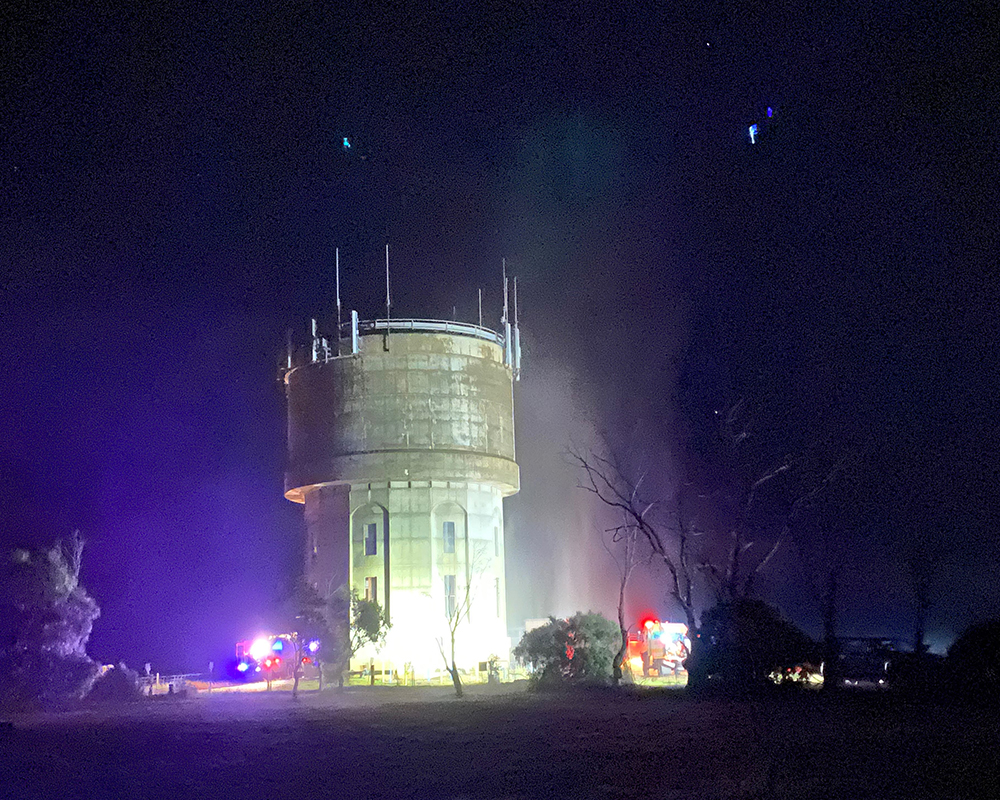 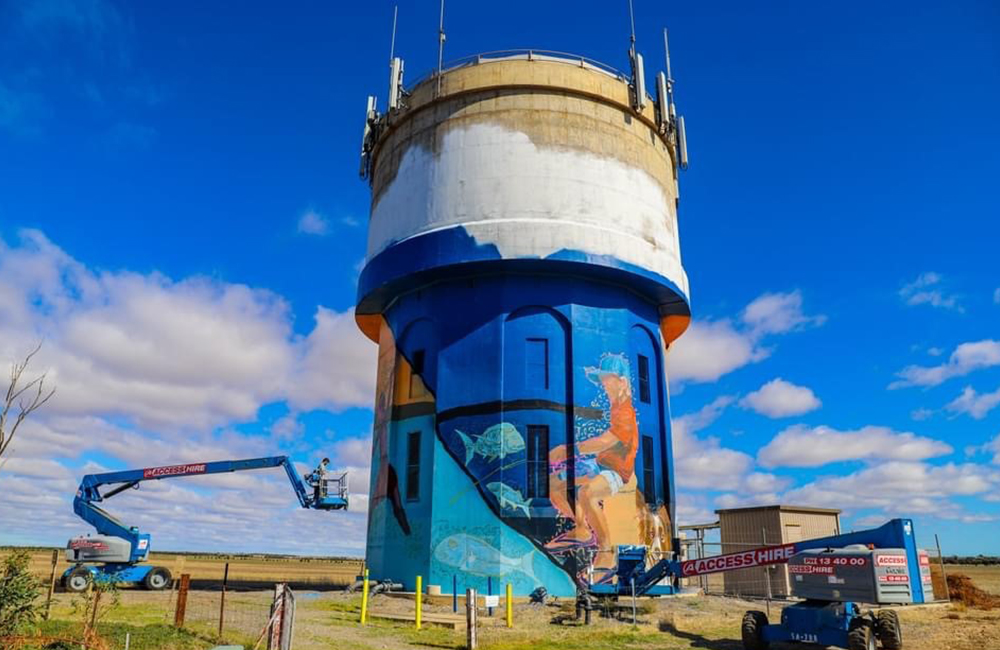 • The concept of the water tower mural gained credibility and support.  Under the auspices of the Port Vincent Progress Association, and with the support of the community, the Yorke Peninsula Council, and both Federal and State members of parliament, the hard work of taking a dream to a reality began back in August 2019 with the formation of a sub-committee (supported by the Port Vincent Progress Association) to move the project forward.
With the successful application for a grant from Foundation for Rural and Regional Renewal excitement began to build.

Extensive consultation within the community highlighted the preferred images.  A ketch, the jetty, fishing, sailing, agriculture and all that is Port Vincent were consequently mentioned.  Thus these have now been portrayed on the mural, along with acknowledgement of our indigenous forebears.

Joel Van Moore – Vans the Omega – was the committee’s first choice as the principal artist, as he has a reputation as one of the foremost graffiti and wall art artists.  Joel has produced many amazing works on other silos and walls, including the Snowtown Water Tower.  Joel has been exposed to a wide range of artistic styles over more than 30 years as he has travelled the world painting, and creating works of art on a large scale, under the name Vans the Omega.  Most important to the committee was that he was a South Australian artist, with sensitivity towards the indigenous component. Joel has designed and project managed the art work on the Port Vincent Water Tower.

Elizabeth Close, also a South Australian artist, is a Pitjantjatjara and Yankunytjatjara woman from the APY Lands in Central Australia. From a background starting in 2007 in canvas work, then moving to large murals, she brings the indigenous aspect of the artwork to life, both visibly and culturally.
Elizabeth designed and project managed the indigenous aspect of the art work

Refuz is the principal artist bringing to life the design of both Joel and Elizabeth.

Camilo Delgado (Refuz) is a Colombian artist and designer, based in Melbourne.

social content that promotes the collective development of society. He brought that expertise and passion to the mural you now see adorning the Port Vincent water tower.

Jasmine Crisp is a painter born, and based in Adelaide, South Australia. She completed her Bachelor of Visual Art (Honours) at Adelaide Central School of Art (2017), and is a current studio artist at Praxis ARTSPACE (Bowden, SA).

Jasmine's characteristic painting practice is inclusive of traditional painting, installation and mural painting. Her work is driven by an interest in relationships between people, their belongings and home environments, with focus on ideas concerning how objects and places are treasured, valued, possessed, or used as forms of self-identification. Although her practice predominantly features portraiture, her paintings give equal importance to the history, setting and symbolic belongings that relate to a figure and the human condition.  Her maximalist and highly detailed tableaus of human, thing and environment are drawn from her immediate personal experiences with people familiar to her, their home-place, cultural position, story and beliefs. As a result of this, her practice is highly influenced by her travels, the people she meets and their stories. This often involves influence from synonymous art historic references and literature in combination with these personal relationships to others/self in the construction of narrative paintings set in both existing and imagined spaces.

The process of painting the mural has been fascinating.

The artists receive the original concept drawing, and place in a grid to get the perspective as they paint around a circular tank.  Each artist has their own ‘code’ and you can see all the different markings around the painting of the young fisherman and the fish which help the artist bring the concept accurately to life on such a big canvas. 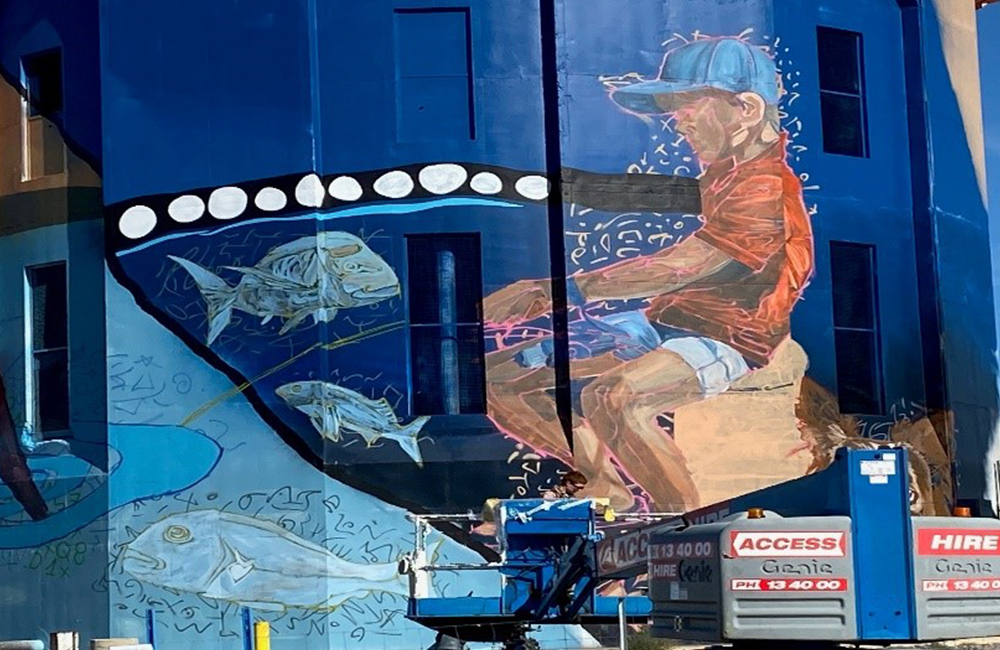 Acknowledgement of support –
Without the support of outside agencies, and a team of volunteers, this project would never have come to fruition.  Thanks must go to: